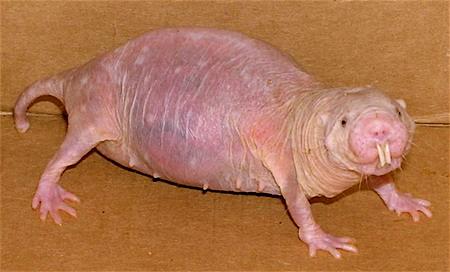 Typical individuals are 8 to 10 cm (3 to 4 in) long and weigh 30 to 35 grams (1.1 to 1.2 oz). Queens are larger and may weigh well over 50 grams (1.8 oz), the largest reaching 80 grams (2.8 oz). They are well-adapted to their underground existence. Their eyes are quite small, and their visual acuity is poor. Their legs are thin and short; however, they are highly adept at moving underground and can move backward as fast as they can move forward. Their large, protruding teeth are used to dig and their lips are sealed just behind the teeth, preventing soil from filling their mouths while digging. They have little hair (hence the common name) and wrinkled pink or yellowish skin.

Naked mole-rats are eusocial mammals (the highest classification of sociality). They live in clusters averaging 75 to 80 individuals. Only one female (the queen) and 1 to 3 males reproduce, while the rest of the members of the colony function as workers. Smaller workers focus on gathering food and maintaining the nest, while larger workers are more reactive in case of attack. Non-reproducing members of the colony are involved in cooperative care of the pups produced by the reproducing female. This occurs through the workers keeping the pups from straying, foraging for food, grooming, contributing to the extension of tunnels, and keeping them warm. Clusters live together underground in complex systems of burrows. These animals build the tunnel systems that can stretch up to 3-5 kilometers (2-3 mi) in cumulative length. Tunnels have chambers, rooms with food and toilet areas. Naked mole-rats find their food through their mining operations deep underground because they never come above ground. Living in constant darkness, most Naked mole-rats possess a free-running activity pattern and are active both day and night; they sleep for short periods of time several times in between.

Naked mole-rats feed primarily on very large tubers (weighing as much as a thousand times the body weight of a typical mole-rat). A single tuber can provide a colony with a long-term source of food - lasting for months, or even years, as they eat the inside but leave the outside, allowing the tuber to regenerate. Naked mole-rats sometimes also eat their own feces.

Naked mole-rats have a polyandrous mating system in which one female mates with several males during one breeding season. In each cluster, there is only one queen and 1-3 breeding males. The relationships between the queen and the breeding males may last for many years; other females are temporarily sterile. Queens live from 13-18 years and are extremely hostile to other females behaving like queens or producing hormones for becoming queens. When the queen dies, another female takes her place, sometimes after a violent struggle with her competitors. In the wild, Naked mole-rats usually breed once a year, if the litter survives. In captivity, they breed all year long and can produce a litter every 80 days. The queen gives birth to a litter that typically ranges from 3 to 12 pups but may be as large as 28. The gestation period lasts about 70 days. The young are born blind and weigh about 2 grams (0.07 oz). The queen nurses them for the first month; after which the other members of the colony feed them feces until they are old enough to eat solid food. Both females and males become reproductively mature at one year of age.

​The Naked mole-rat is easy to keep and breeds well in captivity.

It can be kept in the same way as laboratory conditions - in plastic cages connected with tubes. They are happy to run between these cells. This creates a semblance of colonies that they build in the ground, only made of plastic. These enclosures are easy to sterilize and keep clean. Vegetable food is used as a feed.