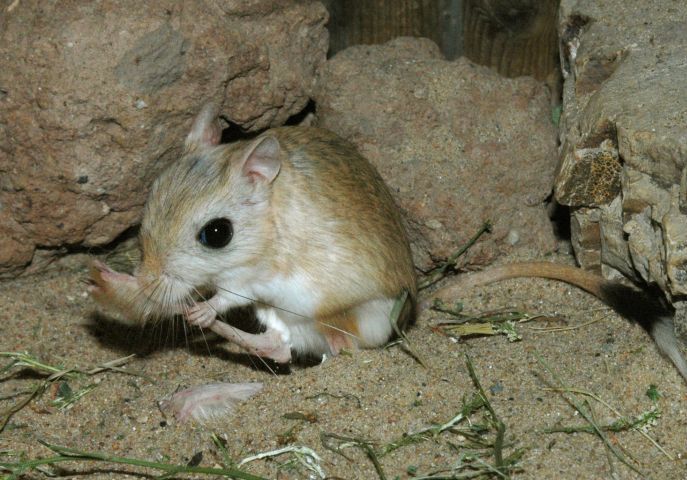 The upper parts are ochre-brown to reddish-brown, a white band stretches from the base of the tail across the hips, and the underparts are white. The long tail has a terminal tassel which is black with a white tip.

This jerboa has a range extending from the Don River and the Caspian Sea region, through Turkmenistan, Uzbekistan, Northern Iran and Kazakhstan, to Mongolia and Northern China.

The Northern three-toed jerboa either lives alone or in pairs. It occupies an extensive home range in which there may be several burrows, several shallow temporary burrows and one main deep burrow. The animal excavates the tunnel with its fore limbs, using its teeth to cut roots, and pushes soil out with its hind feet or nose, forming a characteristic fan-like mound of waste material.

Breeding takes place during the summer with two or three litters, each averaging three or four young, being produced after a gestation period of 25 to 30 days.

Life expectancy in captivity is up to 4 years.

It is convenient to keep it in large aquariums (from 1, 2x0, 25 m and more), covered with a mesh top. There is also laid out some turf, about one-third of the height of the room. The sand is necessary: ordinary river sand is sifted through a soil sieve with the smallest mesh. The resulting dust is the most suitable in this case. It is not worth keeping animals in aquariums with sandy soil only. Sand very quickly gets dirty because  the remnants of feed, and the skin of animals becomes greasy; it is difficult to change the sand daily (sifting it) and takes a lot of time.

When keeping animals in captivity, it is always very important to choose the right food diet, so that the animals receive all the necessary vitamins, salts and other components that abound in their natural food. Jerboa in this regard are quite a difficult group, since, on the one hand, they are very conservative in nutrition, on the other - the plants that make up the basis of their diet are characteristic only of steppes and deserts, and in other zones they have to choose full-fledged substitutes. In addition, these rodents are characterized by a distinct seasonality of nutrition, so that in the autumn-winter season, they eat juicy food very reluctantly.