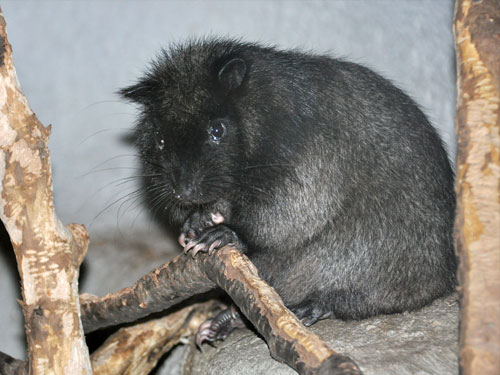 It is dark brown, occasionally with some reddish, but lacking the light-colored sections usually seen in its close relative, the Northern Luzon giant cloud rat (P. pallidus). The Southern giant slender-tailed cloud rat is a large rodent that has a total length of about 67–75 cm (26–30 in) and weighs 1.45–2.1 kg (3.2–4.6 lb).

Phloeomys cumingi is endemic to the Philippine islands of the Palearctic Region.

Equally at home high amongst the branches of a tree as on the forest floor, the Southern giant slender-tailed cloud rat is a slow-moving animal only active at night, spending the day in hollow trees or logs. It usually lives singly, or in pairs consisting of an adult male and female, or a female and her young, but larger groups have also been seen.

The Southern giant slender-tailed cloud rat typically gives birth to a single pup each year, with data indicating that most births take place during the late rainy season. The young are born in the hollow of a standing or fallen tree, or in a hole in the ground. The mother carries her young firmly attached to a nipple.

​Life expectancy in captivity is up to 13 years.

The cage for keeping must be made of materials that these animals will not be able to chew through. The cell should be vertical and as large as possible. It is decorated with branches, shrubs, and a wooden house.

Food and water for rats should be available constantly. The rat needs 30-40 g of feed per day. You can give oats or wheat, seeds, nuts, herbs, apples, carrots. Sometimes you should give mealworms and gray bread soaked in milk. Every day you need to throw away uneaten food. It is necessary that the rat is given to chew bones or solid wood.

It is useful for rats to run outside the cage.