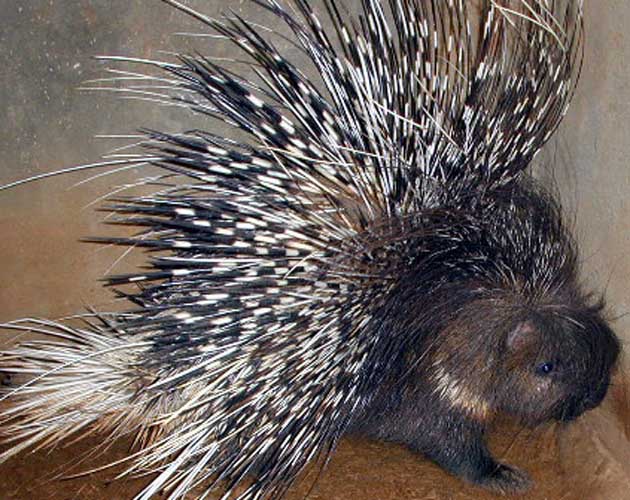 The Indian crested porcupine is a large rodent, weighing 11–18 kg. Their body (from the nose to the base of the tail) measures between 70–90 cm, with the tail adding an additional 8–10 cm.

It is covered in multiple layers of modified hair called quills, with longer, thinner quills covering a layer of shorter, thicker ones. The quills are brown or black with alternating white and black bands. Each quill is connected to a muscle at its base, allowing the porcupine to raise its quills when it feels threatened. The longest quills are located on the neck and shoulder, where the quills form a "skirt" around the animal. These quills can grow up to 51 cm (20 in) long, with most measuring between 15–30 cm. Smaller (20 cm) and more rigid quills are packed densely on the back and rump. These smaller quills are used to stab at potential threats. The base of the tail contains shorter quills that appear white in color, with longer, hollow quills that the porcupine can rattle to produce a warning sound when threatened.

The Indian crested porcupine is nocturnal. Both adults and weaned juveniles spend an average of 7 hours foraging every night. They tend to avoid moonlight in the winter months, which could be a strategy to evade predation. However, during summer months they do not avoid moonlight, but instead tend to stay closer to their dens. During the day, they remain in their dens, but throughout the winter, they occasionally emerge from their dens during daylight hours to bask in the sun.

The Indian crested porcupines live in natural caves or in excavated burrows. Because they do not climb or jump well, they spend most of their lives on or under the ground. However, they are good swimmers.

Indian crested porcupines have a very broad and mostly herbivorous diet. They consume a variety of natural and agricultural plant material, including roots, bulbs, fruits, grains, drupe and tubers, along with insects and small vertebrates.

Indian crested porcupines mate in February and March. Gestation lasts an average of 240 days. A female gives birth to one brood of two to four offspring per year. Young are born with open eyes and are covered in short, soft quills that harden within a few hours after birth. Young are fully weaned 13–19 weeks after birth, but remain in the den with parents and siblings until sexual maturity around 2 years of age.

Lifespan of this animals 15-20 years.

In captivity, porcupines easily become tamed, although sometimes they remain timid and shake their quills in fright. Although porcupines are considered to be nocturnal animals, but in captivity they will walk in the enclosure during the day.

The enclosure must be strong. Porcupine will turn any wooden and plastic products into dust. The bottom of the enclosure should be concrete, or sheathed with metal mesh. In the aviary, you need to install a shelter (a burrow, a booth).

In their diet, porcupines differ little from the usual domestic rabbit: pellets for rodents, fruits, vegetables. Most of them like apples, carrots, Jerusalem artichoke. It is necessary to add branches of fruit trees, vitamins, minerals (chalk), as well as dry dog food, as a source of protein.