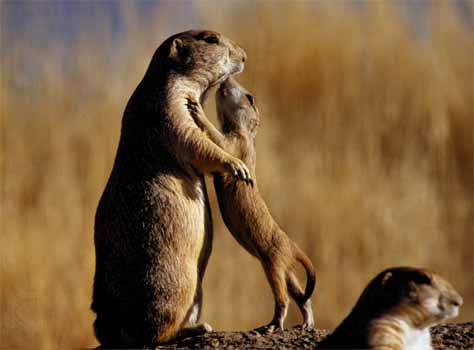 Black-tailed prairie dogs are generally tan in color, with lighter-colored bellies. They may have color variation in their pelt, such as dark fur on their back in black and brown tones. Their tails have black tips, from which their name is derived.

Black-tailed prairie dogs occur in the extreme south of central Canada, throughout the United States, and in north-eastern Mexico.

Prairie dogs live in towns or colonies, sometimes numbering hundreds, living within a very small area. The town has certain neighborhoods, or coteries. The females usually stay in their natal coterie, while males disperse to a coterie nearby. Each coterie contains a group of females who are closely related (mothers, sisters and aunts) and one or perhaps two territorial males. In the breeding season, females will aggressively defend their burrow against other females and sometimes even raid burrows of other female prairie dogs and kill their pups. These animals are diurnal and are active throughout the year. They do not hibernate, unlike many other prairie dog species. When active above ground, they engage in a range of behavior, such as moving dirt to enhance burrow entrances, gathering nesting material, and scratching to cope with fleas.

Black-tailed prairie dogs are typically polygynous (or harem-polygynous); a single male will mate with multiple females from his home coterie. In some cases, though, there may be more than one male living in one large coterie. In such a case, a female in the coterie may breed with both of the resident males, which indicates a polygynandrous (promiscuous) mating system. Mating occurs between January and April, according to the latitude. One to eight pups per litter (3-4 on average) are born following gestation of between 33 and 38 days. Pups are born naked with their eyes closed, and stay in their burrow for around six weeks. They are weaned at about seven weeks but stay near to their mother for two more weeks. Females stay in their natal coterie for the rest of their lives, but males disperse when they become yearlings. Black-tailed prairie dogs reach sexual maturity at about 1-3 years old.

Lifespan is about 5 years for males and 7 years for females.

Providing a natural environment where a prairie dog can burrow and forage for food at all stages of a prairie dog's life is essential. As adults, they are able to burrow several feet underground and they create different subterranean chambers for different purposes.

Unless you have a large enclosure (such as a 10-foot by 10-foot concrete-bordered pit filled three feet deep with dirt to allow burrowing), a large dog-sized cage is unfortunately usually used to house a pet prairie dog indoors. When burrowing is prevented, it is not ideal; it may lead to anxiety from overexposure to stimulus.

If given an appropriate burrow outside, to stay warm in the winter and cool in the summer, they can withstand extreme temperatures on either end of the thermometer. When housed outside without a burrow, however, their systems are ill-equipped to deal with extreme hot or cold temperatures.

A natural prairie dog diet consists primarily of grasses, with some brush and roots. They rely on the prickly pear cactus (which you can grow in bulk at home) for much of their water intake. Depending on the season, prairie dogs may eat more underground roots than grasses, but they are known to be foragers and can adapt to changing environments in search of foods.

The captive prairie dog eats a simple vegetarian diet of pellets, fresh hay, grasses, fresh fruits and vegetables, seeds and nuts, and freshwater. When kept as a pet, prairie dogs should be fed a high fiber pellet diet along with timothy hay or timothy hay cubes.

In captivity, prairie dogs can be offered a pelleted diet such as Exotic Nutrition's Prairie Dog Diet. This food was formulated specifically for the nutritional requirements of captive prairie dogs. You should also offer whole oats. Good fresh vegetables include raw sweet potatoes and raw carrots.