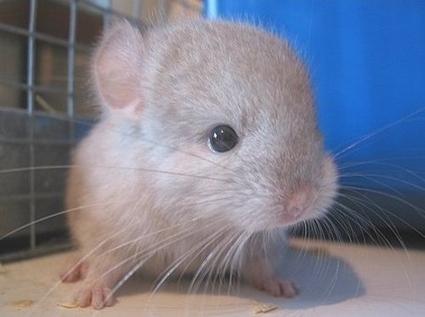 Long-tailed chinchillas have long hair, with gray, white, and black bands; it is silky, extremely soft, and firmly adhered to the skin. The general color of their upper parts is bluish or silvery gray; the underparts are yellowish-white.

Long-tailed chinchillas are found in the mountains of northern Chile. They occur in Aucó, near Illapel, IV Región, Chile, in Reserva Nacional Las Chinchillas and in La Higuera, north of Coquimbo. These chinchillas were reported from Talca, Chile, reaching north to Peru and eastward from Chilean coastal hills throughout low mountains.

Long-tailed chinchillas are social animals. They live in colonies of more than 100 individuals. They are primarily nocturnal creatures but also can be seen on sunny days sitting in front of their hole, climbing and jumping on the rocks. Female in this species are dominant. They are very aggressive towards males and other females during the breeding time. When threatened Long-tailed chinchillas growl, chatter their teeth, and urinate.

Long-tailed chinchillas are herbivores. Their diet includes different types of vegetation, but mostly grass and seeds. They also eat insects and bird eggs.

Female Long-tailed chinchillas are mostly monogamous. This means that they have only one mate during the breeding season. In the wild, they breed between October and December. Females usually have two litters per year, with 2-3 kits per litter. Gestation lasts around 111 days. Young are born well developed, fully furred, and have their eyes open. Females nurse their kits for 6-8 weeks. Long-tailed chinchillas become reproductively mature after 8 months of age.

Generally, their average lifespan is 10 years, though some can live up to 20 years.

Chinchillas are perhaps best known for their incredibly soft, thick, luxurious fur. In the wild, this fur protects them from the elements, but in captivity, it makes them somewhat susceptible to overheating. This must be considered when deciding where to place your chinchilla in the house. A cooler, quiet area of your home is the best place to put a cage for your chinchilla. Summertime temperatures must be monitored to make sure the ambient temperature is not much more than 77 degrees Fahrenheit (25 degrees Celsius).

Chinchilla cages must be large, multilevel homes with platforms, ramps, and perches. The larger the cage, the better. The minimum floor space is about 24 by 24 inches, and a tall cage is best; if possible, get one with shelves and ladders that allow this mountain native to climb. A wire is the best cage material; avoid plastic cages or accessories because chinchillas chew and destroy plastic readily. The tray can be lined with wood shavings, preferably pine; avoid cedar and hardwood shavings, such as aspen, and newspapers. Many chinchilla cages have a wire floor, which is nice for cleanliness, but the wire can be hard on chinchilla feet so it's best avoided. Wire floors or shelves can be covered with wood to give the chinchilla's feet a break. A nest box, made of wood, should also be provided.

Chinchillas have specific dietary requirements that are different from those of other rodents. They must be fed a high-quality, chinchilla-specific food or their health will suffer. Chinchillas require a lot of roughage, and the diet should mainly consist of good-quality grass hay along with pellets made for chinchillas. Treats should be offered in moderation (no more than 1 teaspoon per day). The digestive system of chinchillas is fairly sensitive so any diet changes should be gradual.

Pelleted diets are better than a mixture of loose items. Commercially available loose mixes with chinchilla pellets, seeds, corn, and other food may be nutritionally balanced while they are in the bag, but your chinchilla may not eat all of the parts of the mix. Chinchillas are, in fact, prone to picking out and eating just what they like from a mix, making it less nutritionally balanced. Instead of a loose mix, look for a pelleted diet, formulated specifically for chinchillas that are 16 to 20 percent protein, low in fat (2 to 5 percent), and high in fiber (15 to 35 percent).

Furry chinchillas, who hail from arid climes, need regular access to a dust bath. Keep in mind that it takes regular dust baths to keep your chinchilla's soft, thick fur in good condition. Chinchillas should never be bathed in water. The fine chinchilla dust provided for a dust bath penetrates the thickness of the chinchilla's fur, where it absorbs oils and clears away dirt. Not only do dust baths keep the fur of chinchillas in tip-top shape, but they also really seem to enjoy having a vigorous dust bath.

Chinchillas like to chew, run and jump, and hideout. This means you need a variety of toys for chinchillas to keep them busy and active, especially items for chewing to keep the incisor teeth in good condition. Blocks of wood and tree branches that are free of pesticides make good chew toys. Some wooden parrot toys are also good toys for them, as are the willow balls and rings that you can find for rabbits. It's important to provide toys that do not have small or plastic parts that could be ingested. In addition, a "chinchilla block" or pumice block can be provided for chewing, and this will aid in keeping the teeth trim.

Wheels can provide excellent exercise, although you may find that unless the chinchilla is introduced to the idea at a fairly young age it may not take to running on a wheel. Look for a 15-inch wheel (anything smaller will be too small for most adult chinchillas), with a solid running surface and an open side with no cross supports as there are in wire wheels, which can be dangerous to feet and tails. The risks of overheating make the use of plastic run-about balls undesirable; your chinchilla would much rather run around in a secure, chinchilla-proofed room with no exposed electrical wire or plastic to chew on.