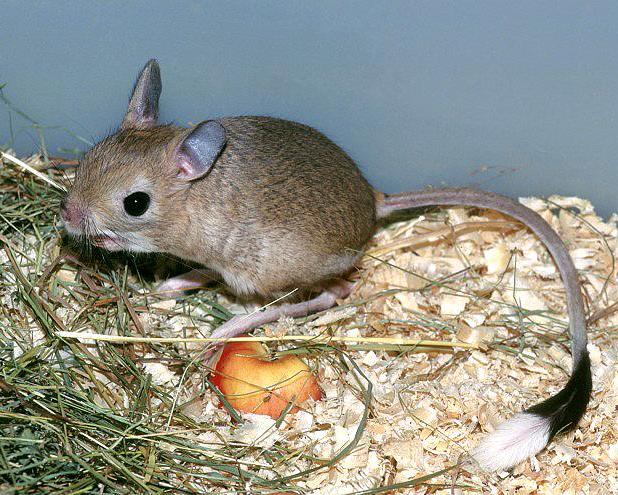 Euphrates jerboas have very large hind feet and small forelimbs. The length of their feet is usually 50 to 61 mm, body length is 230 to 310 mm and tail length is 144 to 195 mm. They also have rather tall, narrow ears, measuring from 27 to 42 mm. There are tufts of hair around the openings of their ears to keep sand out. A distinguishing feature of the genus Allactaga is that, while they have five toes, two of them on each of their feet are vestigial and are found high up on the hind foot. The hind feet also have tufts of hair on the bottom to provide friction against the sand while walking and jumping.

Allactaga euphratica have furry coats with either red and black upper parts and white under parts or sandy colored upper parts and white under parts, depending on the color of the soil where they are found. All Allactaga euphratica have one white stripe on their hips. They also have black and white tufts of fur on the ends of their tails. These tufts are often used by individuals while bounding to signal to other jerboas. Euphrates jerboas living at higher elevations tend to have darker coats than those at lower elevations. All Euphrates jerboas have well-developed whiskers.

Euphrates jerboas are found in the mountains, semi-deserts, and desert steppes of Asia Minor, from Turkey and northwestern Iran, east to eastern Afghanistan, south to northern Saudi Arabia and Kuwait and west to Jordan and Syria.

Euphrates jerboas are solitary, nocturnal foragers. They have great agility and speed, which they use to escape from predators. Another defensive tactic they use is jumping off their hind legs into the air (bounding) energetically. They do this only when they are aroused, however. When relaxed, Allactaga euphratica will slowly walk bipedally. They use their smaller forelimbs to move dirt out of the way while they dig their burrows with their teeth.

Euphrates jerboas living in valleys usually hibernate during the winter from late October to late February. However, if the winter is mild, many populations will not hibernate.

Euphrates jerboas eat mostly seeds and the underground parts of plants. They usually forage at least 0.25 kilometers from their burrows.  In the wild, Allactaga euphratica does not need free water to drink because they get it from the plants they eat.

The Euphrates jerboa reproductive activity depends on the seasons. Females may give birth to up to nine young. In Turkey, breeding season spans from March to July. In Iraq, breeding season ranges from February to May. It is possible for the female to have three litters per year. The Euphrates Jerboa is born an average weight of 2.74 grams.

The longest a Euphrates jerboa has lived in captivity is 4 years and 2 months. Lifespan in the wild is unknown, although it is likely that most mortality occurs during the first year of life.

Keep jerboa in a cage or a terrarium. It will be more interesting to watch them in a terrarium, where the desert landscape is reproduced for them. You can change the animals` day and night for the convenience of observing them, at night the cage is illuminated with daylight, and in the day - red. At the bottom of the terrarium or the cage the owner should place a calcined sand layer of 3 cm. The cleanliness of the sand should be monitored. It is not recommended to let the animal go out of the cage, as it will immediately hide under the furniture, and at night it will gnaw and dig up the wall.

The animals need a sand bath. The toilet for animals is arranged in one particular place, so it is not difficult to monitor the cleanliness.

Nests are arranged in small flower pots, you can place there pieces of pipes (not iron). The material for the nest is hay. Preparing for hibernation is the same as for ground squirrels. It`s better to keep animals in couples. In good conditions they breed in captivity.

Jerboa are fed with seeds of cultivated and wild cereals, sunflowers, beets, adult insects and their larvae, as well as crackers from white bread. Jerboa drink a little.