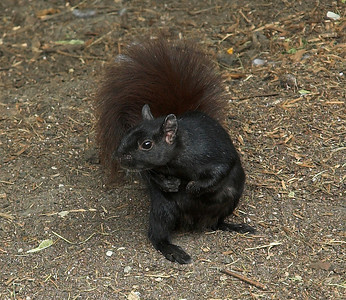 There are three distinct geographical phases in coloration: in most areas the animals upper body is brown-grey to brown-yellow with a typically brownish-orange underside, while in eastern regions such as the Appalachians there are more strikingly-patterned dark brown and black squirrels with white bands on the face and tail. In the south can be found isolated communities with uniform black coats. To help with climbing, they have sharp claws, developed extensors of digits and flexors of forearms, and abdominal musculature.

Fox squirrels are found throughout the eastern and central United States, south into northern Mexico, and north into Canada. They have been introduced into urban areas in western North America as well.

The Fox squirrels are mainly terrestrial, although they can also live in trees. These rodents are generally not very social animals. However, there have been known cases of several individuals living in the same nest during the winter months. Each individual has its own territory, which often overlaps with these of conspecifics. Females and their offspring are known to fiercely defend the central parts of their range. These animals are diurnal foragers that are active throughout the year.

Nests are used as daily shelters and sites of raising the offspring. They construct their nest out of leaves and occasionally nest in tree cavities, especially during the winter. The major forms of communication are scents, vocalizations as well as tail and body postures. Vocalization includes a wide variety of barks. They typically use a chattering sound as an alarm call, whereas a tooth chattering serves as a display of aggression.

The Fox squirrels are omnivores, they generally feed upon plant matter and gall insects, including moths, beetles, bird, eggs, and dead fish. They complement this diet with seeds such as these if acorn, hickory, walnut, mulberry, and Hawthorne.

The Fox squirrels have a polygynandrous (promiscuous) mating system, where individuals of both sexes have multiple mates. However, males usually compete for their mating right. These rodents have two defined breeding season, one of which occurs in December-February, and the other lasts from May to June. Gestation period lasts for 44-45 days, yielding a litter of up to 7 young with an average of 2-3. Females are able to produce 2 litters per year, but generally yield only a single litter. Newborn babies are naked and cared by their mothers for the first 7-8 weeks of their lives, during which period they live in the nest. Leaving the nest, the female covers her offspring with nesting material. Complete weaning occurs at 12-14 weeks old, but the young become fully independent only at 16 weeks old. The age of sexual maturity is 10-11 months old for males and 8 months of age for females.

Fox squirrels have been known to live to 18 years old in captivity. Under natural conditions the average lifespan is 8 to 18 years old, though most squirrels die before they reach adulthood.

The first thing that should appear in your home with the appearance of a squirrel-a cage or an aviary. A 60 cm high and 50 cm wide cage is suitable for a squirrel. An adult squirrel will need more space. For an older animal it is better to buy a cage about 1.5 m high and 60x80 cm wide. In such a home, the squirrel will feel comfortable. When choosing a cage, pay attention to the presence of a pallet in it. Convenient retractable, galvanized and equipped with a handle pallet will save your cleaning time in the squirrel's home.It is also very important to equip the squirrel's home inside. First of all, the cage should be equipped with a water drinker and a food bowl. At the bottom of the cage you should fill the bowl for rodents. Install a house resembling a nest or hollow and put in it dry hay, cut cotton cloth or scraps of fur. When buying a squirrel house, make sure that it has a hinged top or a convenient hole that your hand will fit into. Housing of this design will be easier to clean. But do not buy a house without a bottom, because it will still need to be fixed as high as possible in the enclosure.

In addition, you need to put a snag in the cage or fix a branch on which the squirrel will grind its teeth and claws. If the animal does not have something to sharpen its claws and teeth on, then soon the squirrel will begin to have health problems.

For actively spending time in the enclosure additional elements can be installed: a wheel, a hammock, a ladder, bathing. Only when installing additional accessories, keep in mind that the wheel must be axle-free, and the mounting on the hammocks are carefully hidden.

Very small squirrels up to two weeks old (with closed eyes and no hair) are fed 2 ml of milk every 2 hours. 3-week-old animals are fed 2-4 ml every 3-4 hours. Babies of 5 weeks of age are given 4-6 ml of milk in 4-5 hours. The last feeding of a 5-week-old squirrel can be carried out at 00:00 hours, and the first morning feeding can begin at 06:00. Also, at the age of five weeks, solid food, peeled pumpkin seeds, pine nuts, low-fat cottage cheese and dried fruits are introduced to the diet of squirrels. Starting feeding, do not add fruit or vegetables to the squirrel in any case. The stomach of the baby can not simultaneously digest, and lactose.

After each feeding, the baby needs to have the tummy massaged so that it can go to the toilet.

At the age of 2 months, the squirrel is completely transferred to solid feeding. From this period, the baby begins to eat all the foods.

Products that can be fed to a pet squirrel: mushrooms, cones, acorns, fruits, vegetables, dried fruits, bread, cereals, nuts other than almonds and peanuts, young tree shoots, beetles, bird eggs, mealworm, chicken meat. Out of the minerals in the cell there should be salt stone and chalk.