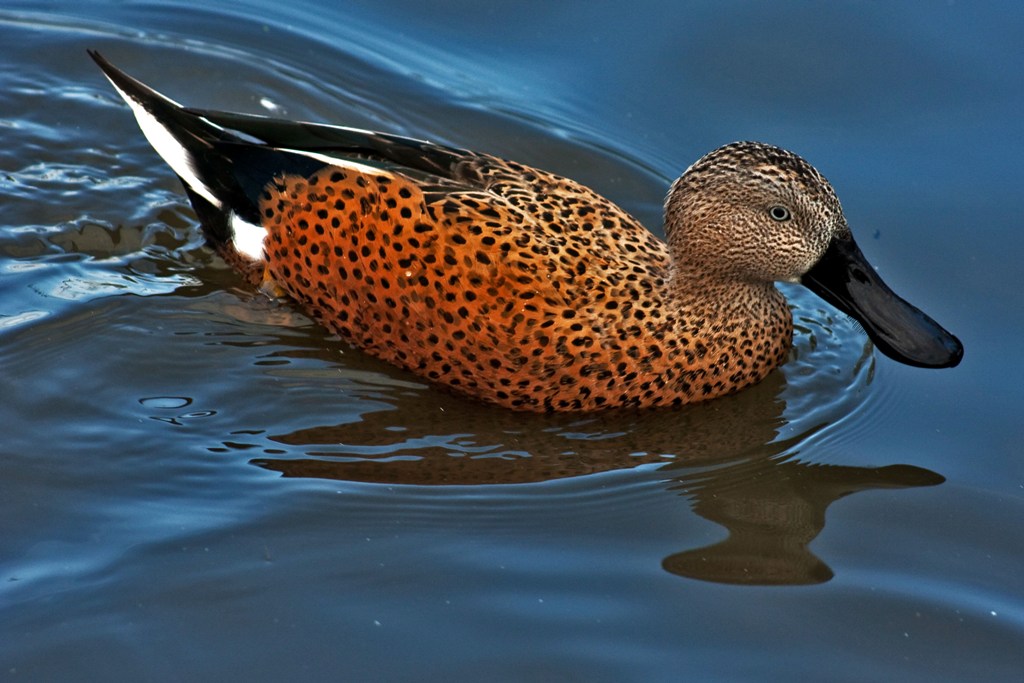 The species has a spatula-shaped bill, a green speculum, and light blue upper wing converts. Male shovelers vary in color from red to paler shades of red (and pink), while the females tend to have large, dark bills.

The red shoveler breeds in the southern half of South America. It ranges from Tierra del Fuego northwards to Chile and most parts of Argentina, as well as to the Falkland Islands, and there are small isolated breeding populations in southern Peru.

The red shoveler is often found in pairs or in small groups. During the moulting period, they can gather in large flocks.

The red shoveler is partially migratory. Populations of the southernmost parts of the range move northwards to winter, and can reach Peru and Brazil. Other populations are sedentary.

The red shoveler feeds on aquatic vegetation such as seeds and parts of aquatic plants. It also takes small invertebrates.

The breeding season starts in September-October.

The red shoveler can nest in single pairs or in loose groups. The nest is on the ground and made with twigs, reeds and dry grass.

The female lays 5-8 eggs and incubates alone during about 25 days. At hatching, the chicks are covered in brown down above and yellowish-cinnamon below. The male does not take part in nesting duties, and the female rears the chicks alone.

Lifespan in captivity is up to 25 years.

In summer, red shovelersare kept in outdoor enclosures. The minimum size of the enclosure is 3 square meters.

In winter, they should be transferred to an insulated enclosure with a temperature of at least +5 °C. It is desirable to equip the enclosure with additives in the form of branches and perches. In the winter room, you must install a pool with running or frequently replaced water.

As a winter bedding for waterfowl, you can use soft hay, which is laid out in places where birds rest.

Red shovelersare friendly to other birds, so they can be kept on the same pond with other ducks.

Artificial shelters for nests are installed in the paddock. Ducks independently incubate, breed and raise ducklings.