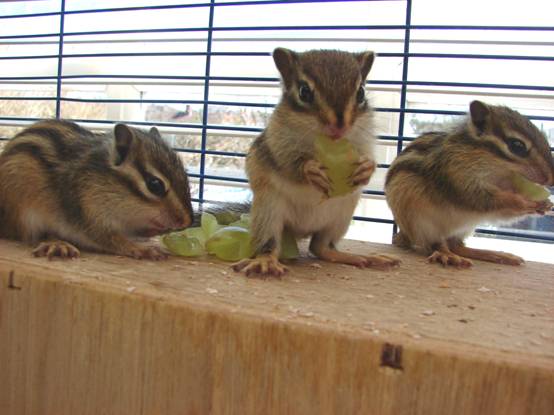 Although these animals can exhibit slight variations in coloration in different geographic regions, they possess several common characteristics. Typically the Siberian chipmunk has 4 white stripes and 5 dark stripes along the back. It is 18–25 cm long, a third of which is the tail. The weight of adults depends on the time of year and food availability.

Siberian chipmunk has a rather large natural range, stretching throughout northern Asia from central Russia to China, Korea, reaching Hokkaidō in northern Japan. In addition, the species occurs in Eastern Europe, mainly due to individuals that have escaped from captivity.

Siberian chipmunks are mainly solitary creatures, except for the winter months, when they are often found in groups, sharing a single burrow. Siberian chipmunks are diurnal animals, resting by night. During the winter, these rodents undergo periods of torpor. They usually store winter food supply, waking up from their torpor every few weeks to eat. These rodents bury their food supplies approximately 5 cm underground. They are very clean animals, spending a lot of their active time cleaning their bodies from the back to the tail. Bathing each other is a common activity in this species.

Communication occurs through two types of vocalizations: when threatened, they emit a fast, bird-like "cheeping" sound that lasts 1.5 seconds; and a deep croaking sound. Although the purpose of the latter in unknown, it's likely to be used during the mating season. There is an unproven opinion that they may also use visual and scent cues.

As omnivorous animals, Siberian chipmunks feed upon a wide variety of food, including seeds, grains, fungi, fruits and vegetables, supplementing this diet with occasional lizards, insects and small species of bird.

Breeding starts in mid-April. Gestation period lasts for 28–35 days, yielding a litter of 3–8 young. Females usually produce single litter per year. However, those in Europe may yield another litter during the summer months. Males take no part in rearing their offspring that are born with closed eyes, which open only at 20–25 days old. At 5 weeks old, the young go out foraging for food with their mother. Weaning occurs at 7 weeks old. After a short while (usually, by 8 weeks old), young are independent. They disperse to find their own territories. Both males and females become mature at 9 months of age.

Their small size may contribute to their relatively short lives, which tend to range from 2 to 5 years in the wild.

In captivity, Siberian chipmunks have a life expectancy of around 7 years. This pet rodent is totally unsuitable for children as it should only be observed and shouldn’t be cuddled and stroked.

Pet shops offer many feed mixes suitable for Siberian chipmunks. In addition to this, Siberian chipmunks like to have millet, safflower, canary seeds, flax seeds, oats etc. in the outer shells. This offers not only a change in diet but also keeps them busy. On top of that, two to three different nuts should be given daily. You can give your pet meal worms, crickets or superworms as a source of protein but it should have 2 protein-free days a week.Fruit and vegetables should be given every day. Cabbage and salad are not suitable as they cause gas and badly disturb the digestion of this small rodent.

In order to be sure that your Siberian chipmunk is getting enough minerals, you should place a mineral stone and a cuttlebone in the aviary. A water bottle which is refilled daily is enough to meet your pet’s hydration needs. Be careful, not every chipmunk knows how to use the water bottle, especially in the first weeks so a water bowl should also be provided.

A Siberian chipmunk should be given 4 to 6 weeks to get used to you, then after that time it should be allowed to run around the room at home freely. Before this can happen, the chipmunk must be fully tame so that it doesn’t try to hide. It should be given at least one hour every day to run around but more time is of course better. Anything that poses a danger, such as, poisonous plants, cables, cleaning materials, medicines etc. should be removed. Siberian chipmunks are active during the daytime. They live very solitary lives and don’t tolerate others of the same species. If chipmunks are kept together it will often end in a deadly fight.

In the autumn, Siberian chipmunks will gather their food stocks, this can also bring about aggressive behavior towards the owner. Bites and scratches can often occur during this time. In winter many chipmunks will hibernate. They rarely come out and when they do emerge into the aviary or run around the room, this only lasts a short time. Some chipmunks will spend a few weeks sleeping in their nest and should not be disturbed during this time. Their metabolism shuts down and any disturbance could weaken the animal unnecessarily.

These pets have an enormous need to run around. Chipmunks in captivity should be kept in large aviaries with at least 1 meter squared of floor space and a height of 2 meters. An aviary for a chipmunk can quickly become too small but can never be too big.

Provide your chipmunk with two or three budgies nests as a place to sleep or shelter. Climbing branches with a diameter of 3 to 4 centimeters are an essential. Grass nests without a wire rack, flower pots, small vases, cork tubes and logs can all be enjoyed as hiding places. A viewing perch where the chipmunk can eat and relax can be made out of a flat board. Some chipmunks have a fixed toilet corner and you can place a bowl with straw or chinchilla sand there to make cleaning up a little easier.

In order to keep their coat clean and to satisfy their natural urge to create tunnels and burrows, chipmunks need a dust bath. This can be a small aquarium or a large flower pot. For the dust you can use potting soil without fertiliser or a coconut husk brick.