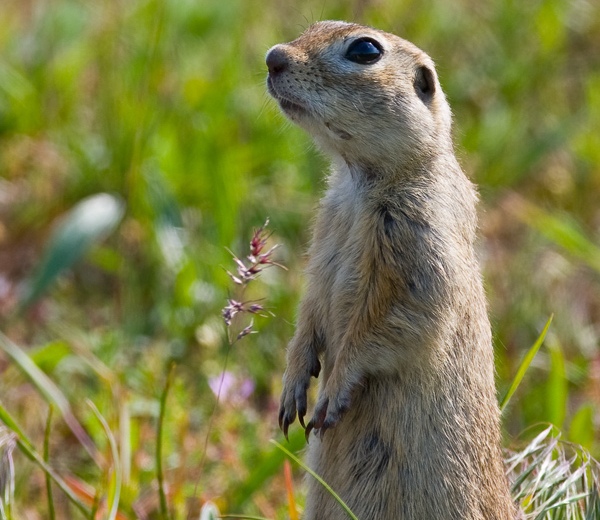 The Little ground squirrel has a stout, low-slung body, short legs and a well-furred tail. It has a brownish-grey back with ochre and yellowish mottling. The head is notably darker with more intense ochre tones and the tail is a light, grayish-ochre color with a pale tip. The body length is up to 230 millimeters and the tail measures up to 40 millimeters.

The Little ground squirrel inhabits steppes and semi-deserts in Eastern Europe and Central Asia, ranging from Ukraine and European Russia east as far as the Aral Sea (Kazakhstan) and Dagestan (Russia).

This species is diurnal and favours grassland, uncultivated ground, field edges and roadside verges, avoiding areas with dense long vegetation. It lives in colonies mostly consisting of non-overlapping territories of adult females, while male territories include several female territories. It builds permanent burrows for hibernation and reproduction and temporary burrows for shelter. Before hibernation, all exits from the burrow are plugged by soil. In March or April the entrances are opened, the burrows cleaned and new construction starts. In late June or July, aestivation occurs and sometimes, especially in dry years, this species goes straight from aestivation to hibernation. During the year it may only be active for 80 to 100 days. As a result of excavating activity over several years, a mound is formed on the surface of the ground, up to eight meters in diameter and 0.6 of a meter in height. When threatened they emit a sharp, singing sound and retreat into the safety of the burrow.

The diet consists of green vegetation, roots and seeds. In years when food is scarce the Little ground squirrel may migrate to seek better supplies elsewhere.

Reproduction occurs once a year and the number of females participating in reproduction varies depending on the nature of the spring weather and the physiological condition of the females resulting from the adequacy of food supplies during the previous year. Litter sizes vary between three and ten per brood.

In captivity, Little ground squirrels live up to 3 years.

Little ground squirrels can be kept at home. A medium-sized cage is suitable for keeping one animal. For a couple – a male and a female, an aviary of at least 1x1 m is being built on a high concrete foundation. Inside the aviaries, shelters are placed (houses, boxes, pieces of pipes, etc.), blocks for sharpening incisors, drinking bowls with fresh water. The bedding is changed regularly. By September, animals are given a lot of material for bedding-straw, leaves. After falling into hibernation, the cells are covered with a thick layer of the same materials. During hibernation, animals are kept one at a time.

Food at home does not have any difficulties: a mixture of grains of cultivated and wild cereals, rhizomes of field plants, vegetables and fruits, green branches of soft trees. They willingly eat oats, sunflowers, grains of cultivated cereals mature and in the stage of milky-waxy ripeness, granulated feed, bread, beets, carrots, mealworms, herbs.