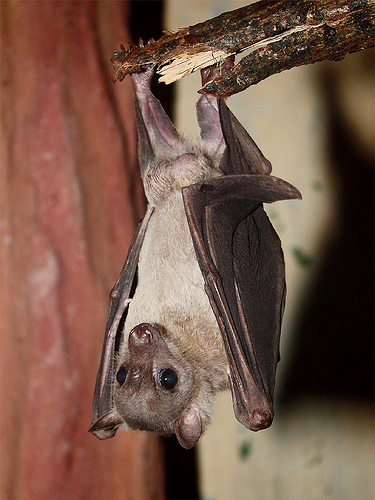 The fur on its body is relatively short and consists of soft and sleek strands. On its back, the fur's coloration ranges from dark brown to gray-brown, while the coloration on its underside is pale brown with a yellowish-brown collar around its neck. Its wings are of a darker brown than its body and the wing membranes attach to the leg at the first toe. Males and females have similar coloration.

Rousettus aegyptiacus is found throughout Africa south of the Sahara, in Egypt, and on the coastlines of the Arabian Peninsula.

Egyptian fruit bats live in groups that range from 20 to 40 individuals to huge colonies of 9,000. The colonies prefer roosting during the day in dark environments that are slightly humid, such as ruins and caves, though small colonies are seen roosting in trees. In the breeding season, males form bachelor groups while the females are in separate maternity colonies. These bats roost close together to reduce the effect of temperature fluctuations. This close contact enables communication with one another throughout the day when roosting. An Egyptian fruit bat is nocturnal and more active in the late afternoon and night, when there is more frequent grooming. Individuals leave the roost around sunset each evening to go and forage, returning before sunrise.

And Egyptian fruit bat is a frugivore, preferring to eat the juice and pulp of very ripe fruit. They prefer to eat the fruit of trees, such as lilac, carob, mulberry, sycamore, fig, and baobab.

Egyptian fruit bats may exhibit both polygynandrous (promiscuous – both males and females breed with multiple mates) or polygynous (one male mates with multiple females) mating systems. Breeding typically occurs between April and August and again from October to February. A single pup is raised, though sometimes twins are born. Gestation is for about 3.5 to 4 months, synchronized births occurring in the breeding colonies. The pups are weaned between 6 to 10 weeks old and there is no difference between the genders as regards their growth. Young reach their full adult size and weight around the age of 9 months, and at about this time they become independent of their mothers. On average maturity is reached at 15 months, though females can be mature as soon as 5 to 7 months.

The recorded maximum lifespan of Rousettus aegyptiacus is 22 years in the wild, with a maximum of 25 years in captivity for both males and females. In wild populations, average lifespan is typically 8 to 10 years due to factors such as predation, vitamin D deficiency, calcium-phosphorus imbalance. Longevity in captive bats is also dependent on environmental temperatures and neurological impairment.

Egyptian rousetteare the most common animals kept as pets from bats. It is recommended to keep at least a couple, and better a few bats, as they are social animals and feel more comfortable next to their relatives.

Not demanding in captivity, and caring for them is feasible, even for beginners.

Any minimum size cage is suitable for keeping a pair of bats 50*50*50 cm. But it is better if it is a spacious aviary with a glass front wall. The roof of the enclosure should be netted, and the back wall should have an uneven structure, so that the wing could safely cling and hang upside down. Bats do not like bright light, so the aviary should be placed in the shaded side.

Feeding usually takes place in the evening, when the bats become active and wake up from their daytime sleep. Fruit saladwill be their food, which can include bananas, mangoes, melons, apples, pears, grapes, papaya, figs and other fruits. Vitamins and minerals can be added to the salad, or through liquid nectar which they love very much. They are usually given nectar several times a week.