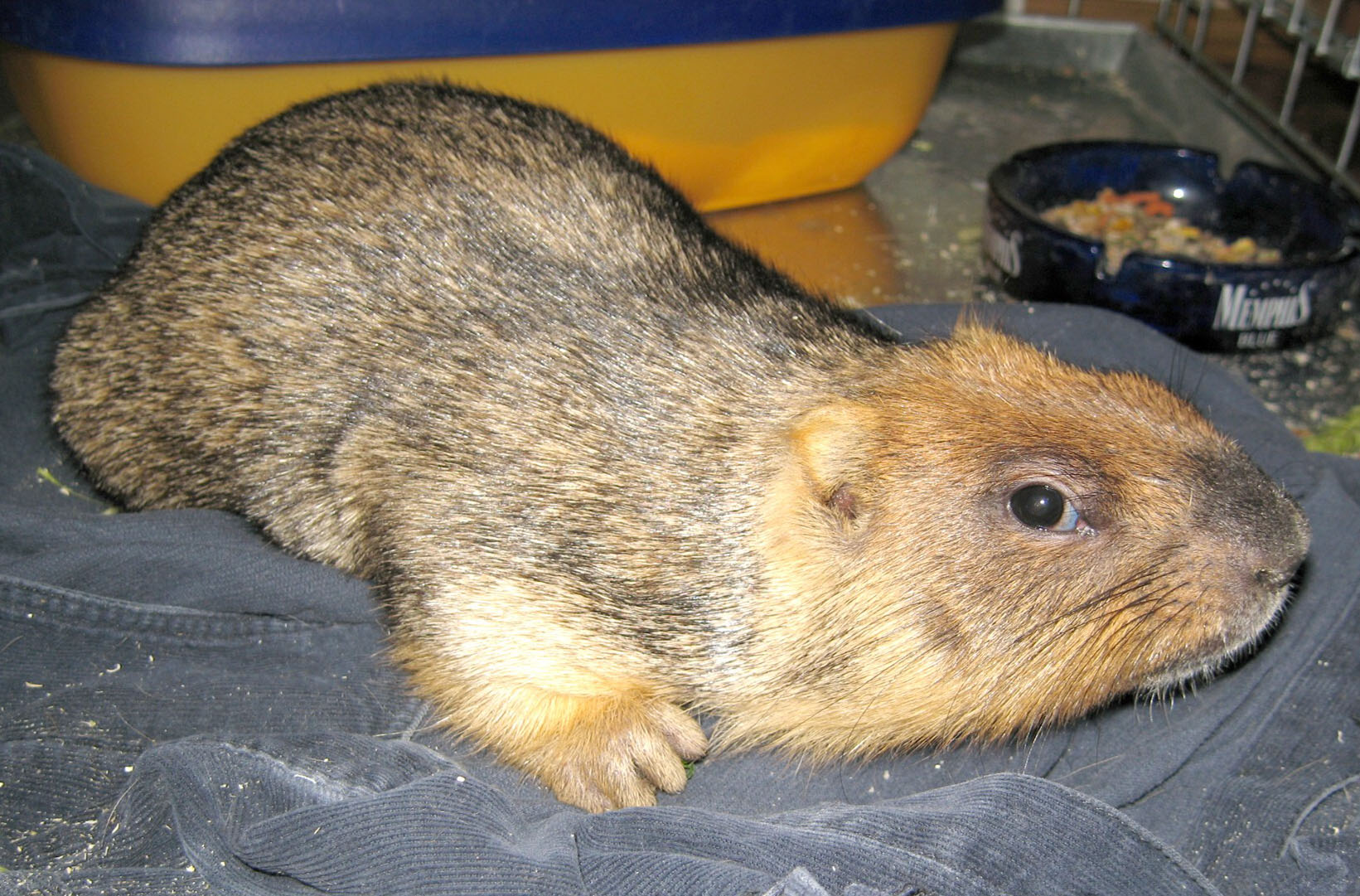 The species is characterized by a round stomach, stubby legs, and a short tail. Body length ranges from 490 to 575 mm. Males are generally somewhat larger than females.

The coat is generally short and dense, with guard hairs that extend slightly beyond the underfur. Mature marmots in fall pelage are usually straw colored to rusty with dark brown hair tips. On the upper part of the head, between the eyes, the dark hair tips are more concentrated, making the top of the head appear darker. Hair around the belly, chin, throat and groin is generally darker rust whereas the tip of the tail is usually dark brown. Pelage color variations also include a paler yellow coat with light brown guard hair tips and occasional albinism.

As in all members of the genus Marmota, pelage color depends on the season. The markings described above refer to a new, fall coat. During the spring and early part of the summer, marmots generally have worn coats that are scorched by the sun. The fur is generally lighter during this period.

Marmota bobak ranges from central Europe, across Russia to central Asia. The species is most commonly found in scattered colonies along the Don and Donets rivers, and in the middle and southern Ural Mountains on the steppes of north Kazakhstan.

Bobak marmots are highly gregarious and socially interactive. Family areas are generally large, and as many as 15 families may inhabit 1 square kilometer. Each marmot family consists of 2 to 5 adults and 2 to 6 maturing pups.

Bobak marmots are particularly active during the morning and at dusk. Evening activity usually continues until slightly after dark. During their most active phase, marmots spend between 12 and 16 hours above ground. Bobak marmots usually spend 5.5 months in hibernation.

One or two marmots within a colony serve as sentinels. While the other marmots graze, the sentinel marmot remains alert, generally with its body erect and forepaws against its belly. If a predator approaches, the sentinel will emit an alarm call that warns the others of the eminent danger. While alarm calling increases the risk of predation for the altruist, it protects other colony members. Sentinel marmots are generally female. By virtue of natural dispersal patterns, females more directly related to other members of the colony than are males.

Mating occurs during either hibernation, or at the onset of spring.

Bobak marmots require 3 years to reach sexual maturity. Sixty percent of adults breed within a given year. Gestation appears to vary between 40 and 42 days. Litters usually include 4 to 6 pups, with the average offspring number slightly greater than 5. Female marmots provide primary care for the young, though the male may fill a limited role in both litter protection and feeding once the young have emerged from the burrow.

As in all mammals, the female provides milk for the growing young. All marmots are born relatively altricial. Young remain in the burrow until they are able to walk, around 1 month of age, and are weaned shortly after.

Captive marmots may live as long as 15 years.

The Steppe marmot is quite well suitable as a pet, the size of a large cat it does not take up much space at home, but it will please you with non-standard habits, funny behavior and unexpectedly highly developed intelligence! Raised from a young age by a human, these animals become tamed and will gladly communicate, play, seek human attention. It can get on your lap, start demanding scratching, and even get into the master's bed at night and fall asleep.

In the house, it is still better to have a cage (a dog cage of about 1x1. 5 meters for 2 individuals) in order to prevent destruction and mayhem while the owners are not at home, because bored, your pet can start to dismantle your home and there is a chance that it will run into the wires.

Marmots need to winter, without it, the life span from 18-20 years is reduced to 4-5 and you will not get offspring from them. Wintering takes place from mid-autumn to early spring, at this time marmots sleep almost without waking up, however, to stimulate hibernation, a low temperature is needed, in room temperature, the animals will remain active.